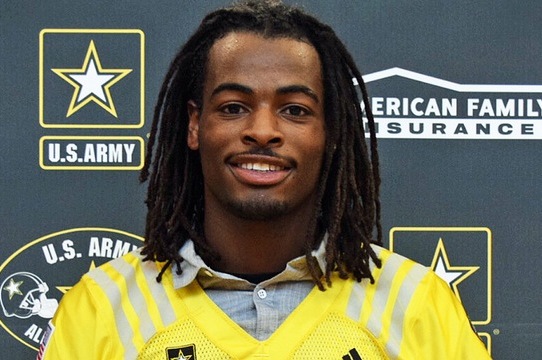 Should Alabama Worry No. 1 Recruit Najee Harris Will Take All Official Visits?

Alabama is no stranger to attracting phenom prospects at running back.

After all, the assembly line under head coach Nick Saban that began with Heisman Trophy winner and first-round draft pick Mark Ingram has seen talented rushers and elite recruits such as Trent Richardson, Eddie Lacy, T.J. Yeldon and Derrick Henry blossom into stars and high NFL draft picks after their time in Tuscaloosa.

Najee Harris, the nation’s top overall prospect in the 2017 cycle, committed to Alabama nearly 18 months ago.

However, as Jim Halley of USA Today detailed, Harris isn’t 100 percent sure about his pledge and plans to take all five of his official visits.

Despite their rich tradition of developing elite rushers, should the Tide be worried about the prospect of losing him to another program?

There are "yes" and "no" scenarios that apply in this situation for Alabama fans.

The "yes" crowd can point to the fact that Harris legitimately could end up somewhere other than Tuscaloosa if another program is able to wow him on his visits.

Harris said as much during a press conference to accept an invitation to the U.S. Army All-American Bowl earlier this week, per Halley:

I’m going to take my five visits, but I just don’t know where. Let’s say this: My mind isn’t set on Alabama. I’m not 100 percent set on Alabama. I’m trying to see what else is out there for me. I’m using my visits to see. As much attention as I’ve gotten, I feel like I have helped my teammates get some offers, too.

While Alabama is seemingly the one program immune to sweating over any one particular recruit, Harris is the first running back to be ranked as the nation’s top overall prospect since current LSU star Leonard Fournette in the 2014 class.

As Steve Lorenz of 247Sports noted, California, Michigan and USC are among the programs that are pushing to get Harris—who is scheduled to be an early enrollee—on campus in the coming weeks.

Harris has all the tools necessary to be the Tide’s next superstar in the backfield if he sticks with his initial pledge.

However, Alabama is still stocked with elite prospects at the running back position.

The Tide also have a commitment from 4-star running back Brian Robinson in the 2017 class.

Additionally, Alabama has one of the premier rushing talents in the 2018 class already pledged in 4-star Dameon Pierce.

Plus, the Tide have a pair of promising true freshmen contributing this season in Joshua Jacobs and B.J. Emmons.

As for where they could turn to with 2017 prospects, the Tide are scheduled to host 5-star running back Cam Akers—who was once committed to the Tide—on an official visit on Oct. 22. They will also get a visit from 4-star running back Anthony McFarland next month.

Saban, who is one of the best closers in recruiting, will aggressively fight to keep Harris in the fold. Regardless of how it plays out, Alabama fans can take solace in knowing the Tide will have other options to turn to in the event he elects to head elsewhere.