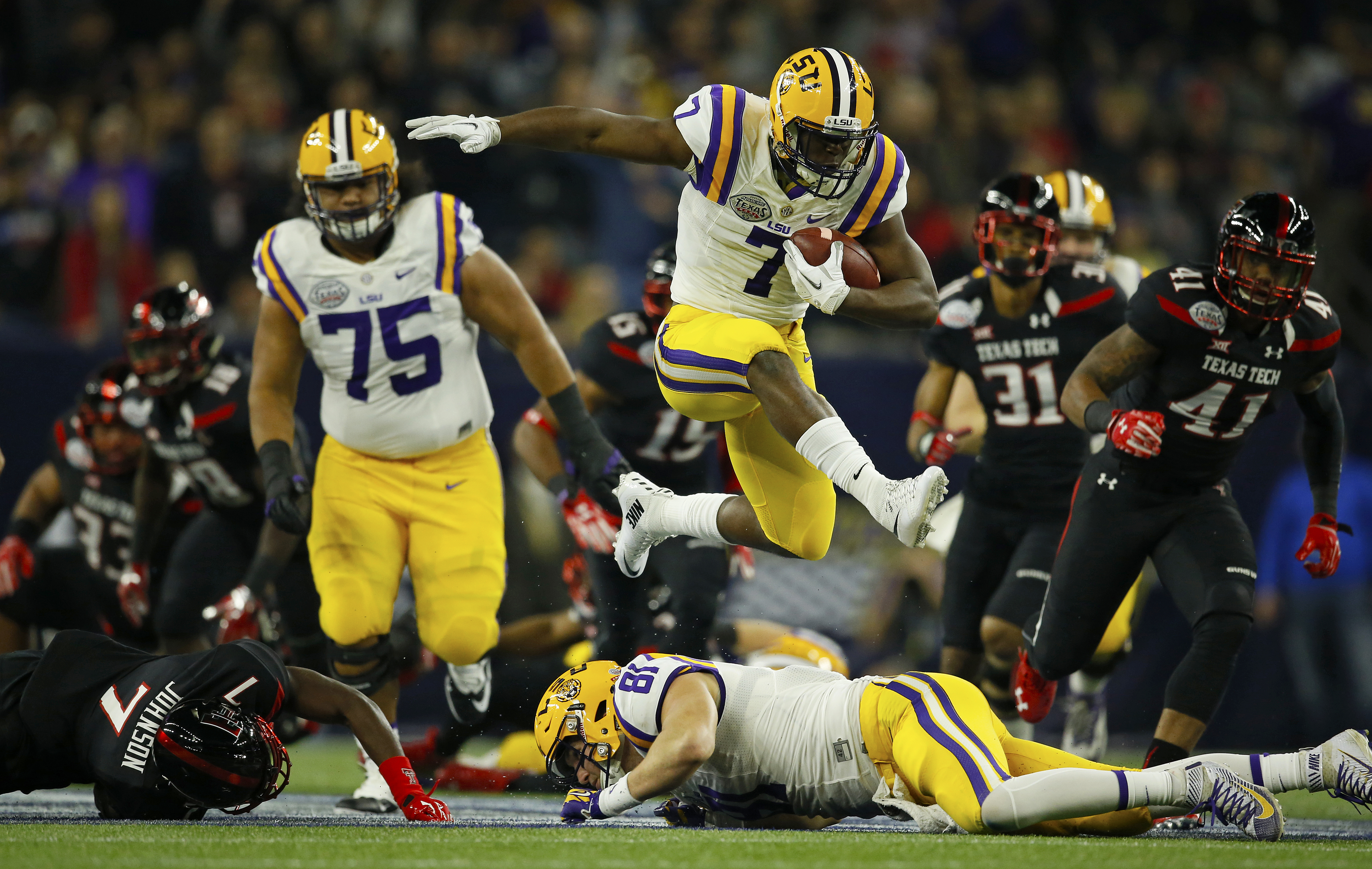 The 2017 draft class looks to be loaded with quality running backs. Who are the top five to watch this weekend?

The running back class set to enter the 2017 NFL Draftpromises to be a special one.

"How special?" you may ask. Well, for all the excitement about Todd Gurley and Ezekiel Elliott the last two years, either one would have difficulty distinguishing themselves in this draft class. We've already previewed some of the top quarterbacks, offensive linemen, and receivers expected to be in the 2017 draft, so now it's time to hit the running backs.

Depending on how the 2016 season goes, the New York Giants may or may not be in the market for a running back, but if so, they could have some excellent choices.

If you’ve been paying attention to college football at all over the last two years, you’ve heard about the running back from LSU. He was being compared to Adrien Peterson before he took his first snap in college. It remains to be seen if he can be as great as Peterson, butLeonard Fournette is a special player. Normal human beings just aren’t as big, fast, strong, and agile Fournette. Beyond his considerable physical talents, he has the potential to be a weapon in the passing game as well. He has the speed to take any touch the distance and reliable hands. If there’s a knock on him at all, it’s that his route running as a receiver needs to improve.

Cook lives in Fournette’s shadow, but he is a spectacular back in his own right. One of the most explosive players in the country, his burst and ability to get skinny through holes lets him turn seemingly any decent gain into a game-breaking play. He isn’t an every-down pile mover at 206, but if an offense can get him in space, he will burn defenses.

Talking about burning defenses, Stanford’s Christian McCaffrey might be the most dangerous offensive weapon in college football. Touching the ball as a running back, receiver, kick, and punt returner, he amassed better than 3,800 yards in 2015, gaining an average of more than 11 yards every time he touched the ball. In four games he had more than 200 yards rushing (192 yards on a fifth occasion), and three times notched more than 300 total yards. Against USC, he had 207 yards (1 TD) rushing, 105 yards (1 TD) receiving, 149 yards as a returner (120 in kick returns), and even a passing touchdown.

If it weren’t for an early-season knee injury that ended his junior season, Chubb would probably be talked about in the same breath as Fournette and Cook. Averaging 8.1 yards per carry in in his sophomore season, he is a human bowling ball with surprising speed for a 5’10", 220lb running back. He will need to show NFL scouts that he has recovered the speed, power, and explosiveness that made him so special.

A week later Oklahoma freshman Samaje Perine brokeGordon’s record with 427 yards. He hasn’t really slowed down since. Perine averaged 6.5 yards per carry in his freshman season, slowing to a paltry 6.0ypc in his sophomore campaign. Like Chubb, Perine is a compact bowling ball of a running back with a hard-nosed, aggressive style. He isn’t particularly fast or elusive, but he is very hard to tackle and picks up long runs as the defense tries to rally to the ball.